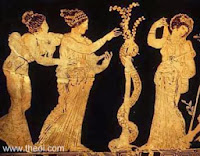 Initial Situation: The party pass through a village where they notice an unusual level of affluence in some or all of the inhabitants.

Significant Characters: The local village headman, who is very weathy due to a deal struck with a being inhabiting a tree in the ground of his house/farm.

The Deal: The tree spirit is paying the villager two gold pieces per day, and has been for some years. Each day the headman comes out to the tree early in the morning and finds the coins at the base. The coins are very old, probably an unknown type unless someone in the party knows about coins or is themselves more than 300 years old.

Specifics
The tree spirit is chaotic and the headman is lawful. roll 1d6:


If the tree is cut down and the roots dug up, 2d4x1000gp wil be found underneath it.