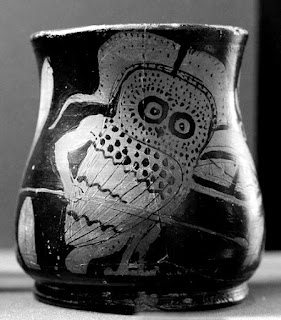 Glauklites are bizarre human-sized owls with human arms, which are normally encountered with the equipment of a standard hoplite: long spear and large shield. They have claws with which they can make attacks but these are so short that against a non-prone opponent they can only be used as an unarmed combat attack. Against a prone opponent, they can be used normally and in addition to any attack made with a melee weapon.

They can shape change into the form of normal-sized owls for short periods (no more than three turns in every three hours), allowing them to flee a combat which is going badly, circumvent obstacles, or track an enemy with the silence owls are famed for. When they change shape, whatever they are carrying is somehow incorporated into the owl-form and re-appears as it was when they assume their “normal” shape again.

While in owl form, they surprise on a 1-4 instead of the normal 1-2, and in either form their eyesight is remarkable in all ranges, as is their hearing, so they are surprised only on a 1 in 10.

They are capable of throwing their spears, although they do not generally carry more than one, so this is rare.

Glauklite lairs are normally (90%) ruled by a larger member with 2 full hit dice and 1-6 wingmates of 1HD. 10% of lairs are ruled by a family of 2-5 giant owls (MM p77), in which case add the latter’s treasure to the Glauklites’ total.

If the largest possible lair is encountered (i.e., 120 individuals base) then there is a separate 11% chance that it contains a family of owlbears (MM p77), in which case add the latter’s treasure to the total.

Flocks of Glauklites lead by giant owls will generally be less aggressive to strangers on first contact (+10% to reaction rolls); those with owlbears will be more aggressive (-10%), and those with both or neither will roll normally for reactions.

Lairs in wilderness will normally be burrows dug in soil, or occasionally sand.

Glauklites speak the language of giant owls whether lead by them or not, although normal members are not intelligent enough to engage in any deep level of conversation.

Microzons are a diminutive race of women who dwell in caves, deep jungle and ancient forests, or in the underworld. They are chaotic, treacherous, and argumentative with each tribe lead by a matriarch who's rule extends as far as her (screechingly high-pitched) voice can carry.

They hate humans, or indeed anything bigger than themselves, dress for combat in untanned leathers which quickly become tatty and as dirty as their owners. In lair, they will have some (not very diligent) guards but most of the tribe will be wearing loin-cloths and able to move at 9".

The microzons as a race respect only mothers and if any manage to become pregnant she will immediately leave the existing tribe, along with her allies, to form a new one. If there is nowhere to go to, the result will be civil war until only one mother is left.

For every 12 microzons rolled in an encounter there will be a (raiding) party-leader and her two guards, both with 4 hit points. For every 25 there will be one heroine of 5-7hp and fighting as 1-1HD (CL 1).

All microzons are adept with short recurved bows and attack at +2 with them, doing 1-5 damage (d6, treat 6 as 5). Heroines will have +1 reaction/attacking bonus (thus attacking at CL 4 with the bow).

Other equipment will include a shield which is hitched over the back while using the bow, short spears (5', wsf 6), and a dagger, which they can throw in extremis.

In lair, most will have access to footwoman's picks, as they greatly prize silver and gems which they will sometimes trade with or for. They are poor workers however, due to their dislike of orders, and mine only half as quickly as goblins while having the same discipline issues (see DMG pp105-106).

The chieftain will be a full 1HD leader with 1-3 levels of clerical ability (sans HD). If you want to stat-up leaders, use average dice as per normal NPCs and give +1 STR, +2 WIS, and +3 CHA. If you're using psionics, then leaders may be so capable.

The instinctive reverence for motherhood means that there is a vestigial higher-order structure to the microzon's society and leaders of tribes will consult with leaders of other tribes who are older and, most importantly, have more children. If a tribal leader speaks of a "Queen" they will have one such mother-figure in mind, but which specific elder is meant will vary from chieftain to chieftain depending mostly on locale.

The highest honour and the title of "Grandmother" will be given to the oldest few and there are usually only one or two such within a hundred mile radius of any given point, at most.

As with many chaotics, a common enemy can bring more than one tribe together into a squabbling, short-lived force to be reckoned with.

They worship a range of goddesses, chiefly Artemis, Hecate, and Eris.

The are a long-lived race, with Grandmothers sometimes reaching 1000+ years.