I and, I believe, many others have puzzled over the loyalty chart in the DMG which reads: with the helpful examples

Well, as it happens, the answer is is clear display on page 119 of the Players Handbook: 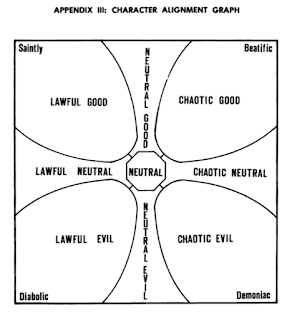 Where the path LE->LN->NG->CG is clearly visible across the small bars that connect Neutral to the extreme alignments (LG, CG, CE, and LE): 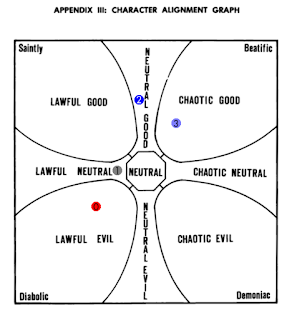 This obviously also implies that a character can move directly from LN to NG as part of a gradual drift, something I don't think I've ever seen discussed before. It seems odd at first glance but when it comes down to it, neither L->N nor N->G is in itself a particularly big leap. But it does slightly undermine the normal vision of alignment directly mapping onto the Great Wheel of the outer planes, where it is not a simple step to go from Nirvana to Elysium, even using the DDG map.

It's still not perfectly clear: it seems that landing on the bars that connect Neutral with the extremes is not allowed and they simply mark the border, but that aspect of the graph seems a bit iffy to me.